[UI.Vision RPA] No tab for dashboard yet

I was doing some tests with RPA command line and suddendIy a pop-up appeared in my Firefox browser when Firefox and RPA launched. And the Macro didn’t start : 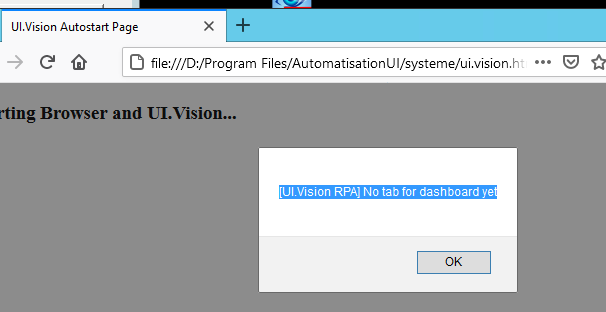 I have browsed the forum and I found that some users have encountred the problem but with no solution.

I don’t know if there is something to do with memory (that’s what the other threads suggested). When it happened I had 50% memory left, but indeed firefox and RPA were slow to open at this time. After closing the browser everything came fine.

I manage the problem this way (but it didn’t happen again so far). My first lines in my macros are : I “csvSave” a file (ok.csv) an I do a “LocalStorageExport”. My command line is called by a program which test in a loop if the ok.csv exists. If not after let’s say 30 seconds, it kills Firefox and start again the macro, and there is a loop as well with a tempo. With this code, I assume that it is a temporary problem.

But do you have more information about this problem or a better solution ?

This error shows up if UIVision inside the browser is not ready in time for the command line. So it has nothing to do with the macro, it happens before UIVision IDE even opens. As you observed, it happens mostly if the browser is really slow - but actually it should not happen at all. It clearly is a bug.

Question: For the command line, are you using the new method with the ui.vision.html file?

Thanks for your answer.

Indeed I use the “autostart HTML page” ui.vision.html as it is said in https://ui.vision/rpa/docs#cmd.

I am brand new on ui.vision so this is the only way I know (I didn’t try to analyze or create my own ui.vision.html file).

Clearly, I had the feeling it was a “tempo” problem". It seems that the IDE didn’t start early enough and it stays in standby.

That why I scripted a test in the macro to save a file to be sure from the point of view of the program that the macro started.

Thanks for the info. It is good that you have a workaround.

Also, I added this issue to our todo list for some more testing.

Hey Admin, I am also facing the same issue not every time but yes it is occurring twice or thrice a week. I have scheduled around 30+ bots and I usually get this issue twice/thrice a week for 3-4 bots only. Can you please suggest the workaround to resolve this issue.

Hi @Anshu_Bhatia - if it happens, when does the error happens? At the start of the UIvision command line? (= when browser is started?)

FYI in your CLI script if you start the browser by itself and then pause for 10-15 seconds and then start the marco you won’t have this issue as well as some others.

To understand your workaround (since I had also the problem).

Exactly. Since doing this I have yet to have any issues.

Thanks for your reply.

Unfortunately it does not work for me. Maybe I do it wrong.

But my test could help the developers to check if this error case is a normal behavior (it seems to happen every time).

When I run my bt file, the result is : it opens firefox with one tab (my home is : https://api.ipify.org/)
Then it waits 15 sec.
Then it opens a second tab with “Starting browser…” and ui.vision RPA
Apparently closing the 2nd tab, since the ui.vision RPA ends on an [error] Invalid tab ID: 2 each time.

What is the code inside this macro? Do you get the error with every macro (e. g. DemoFrames) or only this one?

Thanks for your interest. It is a very simple macro :

I didn’ try with another macro. Each time I run the 3 lines .bat I’ve got an error.

The same for DemoFrames (just tested).

Edit May 28, 2021: Another solution to this issue is to edit the timeout values inside ui.vision.html

Hi @Eric78 - I tested your batch file and all works fine for me:

(Do you maybe have another extension installed that could interfere with UIvision? A screencast of your issue would be helpful). Yes it occurs when browser starts.

Yes it occurs when browser starts.

@Anshu_Bhatia => Great, then the suggestion from @User9898 above will work for you as well:

This is the same approach as shown in my screencast above.

Thanks a lot for your testing!

Indeed I desactivate one by one my extensions. And it works.

FYI the one which cause the problem are : “xPath Finder” and “Try Xpath”.

FYI the one which cause the problem are : “xPath Finder” and “Try Xpath”.

Ok, great to hear. This is very useful information, thanks!

for Mac, use this code in your sh file:

The "[No tab for dashboard yet] error can also be a shown when simply the macro is not found, just like here: ﻿Status=Error: t.message is undefined - #3 by admin