What am I doing wrong or different?

I am a producer. I make beats. And one way to find people to collaborate with and make more music is by contacting them via private message.

I recorded myself going to a chart, finding a popular track/beat and finding a fan that liked the song which beatstars makes public by showing. And the only thing Ui vision recorded was me going to the Chart, none of the actions after like choosing the track, then finding the people that like it…

DO I need to have selenium installed? What I do?

What is your problem ?

Uhh well I figured out how to record to a degree. But to repeat a command can’t. umm I realized selenium ide isn’t needed but can be used. I use a automation extension on chrome for beatstars. Is website to sell music, I’ve have some success via contacting people on a paid chrome extension called beatshine. Beatstars publishes peoples likes on a song if it’s popular. From those likes on a beat, you can use those signals (likes) as beatstars posts the profiles that like it. This is how beatshine works

Now I’ve been able to record going onto a top chart 1-30ish, go to most popular song, hit the (Fans) section (published liked signals) and then contact them via message. BUt I’ve only been able to do it with my mouse, I don’t know what I’m doing and how to repeat it, or even to sweeten the pot by changing up the message I use when I contact users, but so far it’s been all by hand. I’ll record something and put it on YouTube hold on

So I’m clueless how I make it repeat all the way down the list, there’s litteralyl 9000 names. I would stand a good chance at get engagement and people listening to my tracks. I tried studying xpaths to find each container and just apply a notepad file to it.

Do you know where I can pay a freelancer, theres only 2 on fiverr offering it. I hired one and he tried getting more money, I then \said no Ill go on the forum and learn, he then said I can do it for 5

So I would appreciate anyone pointing me toward a freelancer source other than fiverr. It would really help my life and current mood. I been going through things. Or maybe a good tutorial playlist?

It can’t be literally maybe 10 steps,

this is what I’m dealing with

I don’t have time to learn a coding language, make beats, edit videos, record vocals, side projects, graphics via psd. It was a nice Idea.

What is the problem ?

I already tested zennoposter but in my opinion is a bad and limited software.

With ui vision you can automate all works, need only to study.

I already bought zennoposter so going to have to live with my decision.

Interacting with accounts that have liked certain tracks/beats and one by one messaging them a random message. Then going back to that same fan like page, doing it to the 2nd fan that liked, then 3rd.

Then when done with that track, doing it to the 2nd beat on the chart… With again as described above method.

I’m no coder, but I’m sure I need to target the box that holds the username that just liked the track, otherwise it’s going to just keep messaging and commenting to the same people which defeats purpose.

Seems like when I explain myself just makes it worse.

Step 4: Click the first beat on the chart
which comes to beatstars.co m/beat/walk-my-choppa-5928464

Step 6 Right Click The First User Name and press new tab. I would prefer to hover over every loaded name, and some sort of command inspect wether or not this person has plays, because this would be a listener, fan, rapper who listens to Producers, instead of being a producer. But this is asking too much 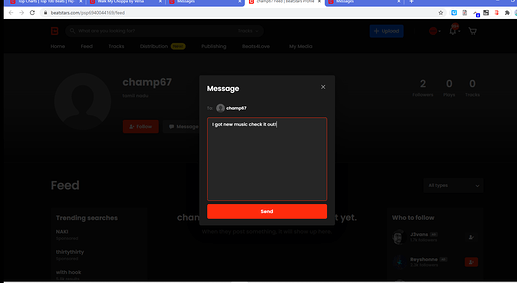 But here in lies the problem, right clicking usersname on UI vision and hitting “open in new tab” brings me to the users profile… yea so where you see Champ67 name the first position (The latest person to like the track), UI Vision records this as the Users account link…

So umm… When I go back a day later to that chart…Assuming that same song is in same position 1…That user isn’t going to be the latest fan to interact with that track…
Yet it will bring me to their profile once again, and send the same message, not the current user who’s in that first position…

I mean forget even going to the right of that user… Cause screen recording will again record a user profile, not xpath placeholder and have no clue where I find that, nor put it within the step. I wanted to go down one by one. Not possible with screen recording, will just open profiles to people that were formerly in that position…

And even for the song…I screen record macro hitting that first song/track/beat… IT records that song/track/beat URL and not it’s I guess Xpath place holder that can be clicked and recorded instead of the url?

So I’m pretty much going in circles here, and this is just 1 track, I’d love to do whole chart…Can’t. This is why I tried hiring Ui Vision Freelancers, but the ones I found are greedy and not worth the $ so I spent 38 on Zennoposter. I can atleast use scroll down function on it to where I load a good number of those 9000 fans who liked the song… Then parse it, and grab 430 peoples account urls…Still learning how I can send messages to those numbers but ohh well.

WIth ui vision you can automate all, need to study only and think the best solution.

I used zennoposter and I do not consider it a good program for numerous reasons also it is very difficult to use, requires installation, it is very expensive, it is not portable, and it is not used in normal browsers.

Im getting a refund on zennoposter

For UI Vision, I highly recommend that you use the visual XClick and XClickRelative commands whenever you run into an XPath problem.

These visual can not be recorded like the native web commands. Instead they are created manually. However, they “free” you from dealing with all the XPath and CSS problems! That is why I like them so much

What do you suggest on freelancer wise. I’m 18 days in, got a zennoposter refund would not do it 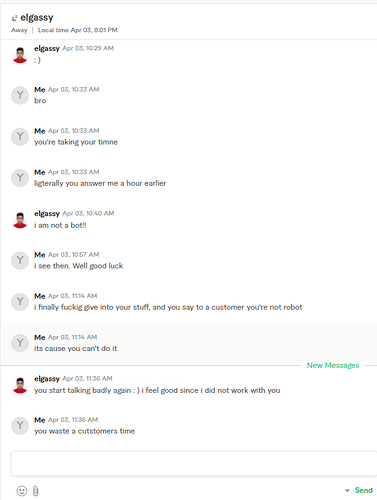 I still don’t understand what you need to do and why you can’t with ui vision. I understand that you have to create a simple bot to click the button I like, insert comments and send a song into play, if so it is a job that can be done simply with ui vision, think well of the best solution in 10 days write a great code (just 30 commands) and it will work very well. Create short, fast macro code so that it is error-free and requires less memory.