Thanks for your reply !

Also could you please help me to know as what best practices i should follow if i want to trigger my test cases via jenkins ?

As per my understanding, We need to export All first and then need to trigger that test case via command prompt . Please correct me if i am wrong.

You do not need to export the macros (test cases). UI.Vision RPA has a command line, so you can start UI.Vision RPA directly from Jenkins.

Now, the recommended way is not to call UI.Vision RPA directly from Jenkins, but instead start e. g. a PowerShell or Python script from Jenkins. And then this script starts UI.Vision RPA via the command line. The advantage of this approach is that you can use the scripting language to add some additional error handling or debug logs if needed.

The status (test pass/fail) is returned to Jenkins via the exit code of your script.

Example Scripts to use: 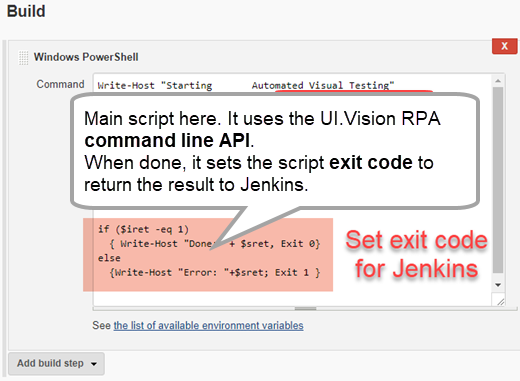 In this example we use Powershell and the Jenkins Powershell plugin to run UI.Vision RPA, run the test case (Play) and then close the browser again. The only special command for Jenkins is the last line, where we set the exit code to 1 (if error) or 0 if the test was successful. This is done to integrate with the Jenkins reporting where 1 means error. Because the API is a standard command line, you can use any other scripting language instead of Powershell. Some Jenkins/RPAusers also use a small C# app to control RPA, and then launch this app from Jenkins as batch file.