I use from long time ui vision and katalon recorder and i can confirm that Katalon Recorer working better of ui vision.

I say this both because it is true and because I would like the vision to be improved despite noticing so many errors in ui vision in years never solved, I love ui vision but for automation i need a software that can work without bug.

Katalon Recorder records all sendleys commands and allows you to emulate the keyboard quite well, you don’t need xmodules, it’s free and it works and not require focus on screen.

Ui vision sendkey never working and commands can not saved by recording. 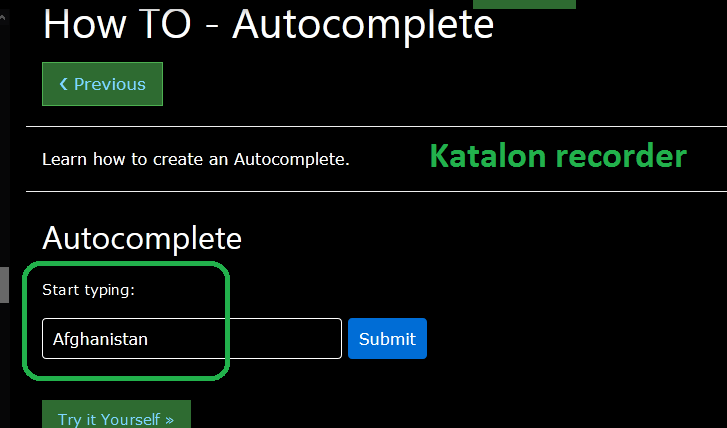 Ui visioin sendkeys bugged (it never work in any site)

The sendkeys command in Katalon Recorder works well and is also recorded instead in ui vision works very badly and is not even recorded automatically. I’ve never seen Sendkeys working in Ui vision.

I hope you can improve sendkeys and make it look like Katalon Recoder.

Thanks for the interesting test case! But does your Katalon macro really work? I installed the Katalon recorder, and it does not work at all with the autocomplete dropdown (just as the Selenium IDE SendKeys does not work):

If your Katalon script works, what did I do wrong? Can you attach your working test case?

On the other hand, the autocomplete dropdown works great with XClick and XType

You wrote some wrong things so I prove the whole forum the truth by adding 2 videos where you can clearly see that I’m right.

Katalon Recorder works very well it never freezes, it doesn’t have strange errors like ui vision that has so many errors never solved and all the commands in Katalon Recorder are excellent and perfect so you can let it work automatically knowing that everything will be fine and everything will always work and I wish the same is with Ui vision that I love but sometimes prevents me from working for strange mistakes.

Here are the videos that prove everything watch ui vision yourself with Sendkeys that errors shows and doesn’t work properly, try the videos yourself can’t lie show the truth.

Sendkeys with Katalon Recorder works great with all keyboard keys and is also recorded automatically is an excellent command that doesn’t work in ui vision instead.

I repeat I write this because I love ui vision and I would like it perfect and precise to let it work automatically without risk of bugs for this I wrote you this comparison to show you the real problems of ui vision.

I do not know if a problem depends on the browser, the operating system or an addon or anything else but if I point out a problem it is because I see the problem and I never point out problems that do not exist.

Your embedded videos do not play for me. This is what I see:

Sorry i upload on imgur now

Can you see the videos now ?

Thanks, I see it now. So I retested in Firefox. Result: In Firefox the Katalon sendkeys works (as in your video), but not in Chrome.

So… I am sure we can make our sendkeys work in the next Firefox version, too. Thanks for this hint!

About recording: The UI.Vision Selenium IDE records the macro below. This works, too, and is even simpler than using Sendkeys (nevertheless I agree that in this case our Sendkeys has a bug, and will be fixed):

Katalon stops my Firefox, do you see this as well?

Sometimes it also happened to me that Katalon Recorder slows down the browser looks like a random bug doesn’t always appear.

I currently use firefox for ui vision because it requires little memory compared to Chrome.

I soon release the video of the problem I have with Xclick with firefox, sometimes Xclick gets the wrong position and I do not understand why it is caused by firefox or caused by an addon or caused by something else.

I update the Xclic post with the video so you see that i really get the position wrong a few times and even today I did not understand the reason and how to solve.

Thanks, I am looking forward to testing it

Will the sendkeys command be improved in future ui vision updates?

This command is useful when working with a virtual machine and you don’t have permissions to install xmodules, in which case Sendkeys can help automate.

I wanted to know if Sendkeys in ui vision emulates all keyboard keys (KEY_ENTER, KEY_TAB, KEY_SPACE and other) without the need for installed xmodules?

I added videos for my Xclick problem.

I do not know what it depends on but to me in firefox it does not work well,

I made 2 videos to prove that the problem is random and comes up several times in an unpredictable way.

I have repeatedly changed firefox, and reinstalled ui vision but Xclic’s problem remains for me.

I added videos for my Xclick problem.

Thanks - but I can not see any video?

Also: Please upgrade to the latest XModules V2021-2 - it fixes almost all known issues. Does it work better for you?

Next days I install new xmodules and try again